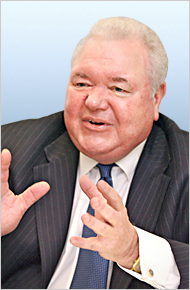 Do what you say when you say you will do it.  Promises, the ones we make and the ones we keep, are indications of leadership.  Passion, or the ability to focus on something until others believe enough to follow, is another.

F. Mark Gumz, CEO of Olympus Corporation of the Americas, was interviewed for the Corner Office column of the New York Times.  His comments on early leadership lessons and passion provide food for thought to start any day.

When asked about early lessons in leadership, Mr. Gumz replied:

I was a humanities graduate with a major in English literature. I had never taken a business class. And I got a job early on with a great company, G.E. I was in sales, which I felt very comfortable in because I had been writing papers in college. I had to develop a thesis statement, and I had to prove that thesis. And depending on how well I did it, I got a certain grade. So I was confident that I could sell, and I was confident I could have conviction about what I was selling.

“And the other thing is, get back to me. If you say you’re going to get back to me with an answer, make sure you get back. If you do all those things, you’ll be successful.”

And off I went. I felt empowered by that, because they were very simple lessons, and I’ve never forgotten them.

Mr. Gumz’s comments on passion are also instructive.  People want to follow others who have passion for what they are doing.

The one characteristic that came through with all the really good teachers I’ve had is passion. It may be overlooked as a leadership quality, but I think it’s really important. You have to be passionate about what you’re trying to do, to the point that people will follow what you want to do. And I think that when we look at failure — because I think it’s important to talk about failed leadership, as well — it more than likely occurred because the individual didn’t have enough of a commitment that came through, that people would take the leap of faith and follow. I think fire in the belly is not something that can be overestimated. If people really feel convinced that something is possible, they’re going to try.

Other Books of Interest

The Quantitative Marketability Discount Model (QMDM) presents a practical model to assist business appraisers in developing, quantifying and defending marketability discounts under the income approach. The model allows you to quickly and easily quantify marketability discounts in the appraisal of minority business interests. The very latest version of the (QMDM) now includes a revised and expanded explanatory manual, delivered as a .zip file* electronically via email.

Get Updates Via Email

Disclaimer
The articles, tools, and other material provided on this site are for informational purposes only and are not intended to take the place of professional or legal advice from your accountants, lawyers, business consultants, or other advisors. Please contact your own advisors regarding your particular situation. The opinions expressed on this site are solely those of the author and not those of Mercer Capital.